A local woman was killed and two men were injured in a multi-vehicle traffic crash at approximately 11 AM on Wednesday, May 25, 2022, near the 3000 block of Cheney Highway. 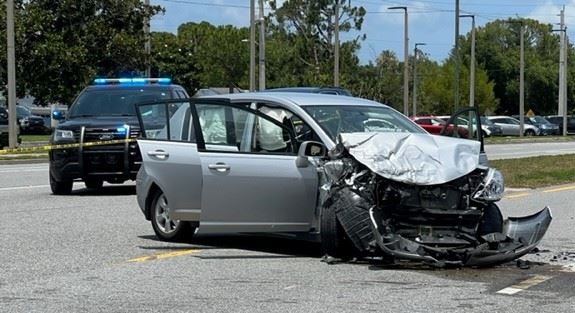 The preliminary investigation revealed a grey 2014 Hyundai Tucson driven by Franklyn Brookins, 87, of Cocoa failed to yield to oncoming traffic as he was making a turn from the westbound lane on Cheney Highway into the north entrance of Walmart, and was stuck on the passenger side by Erika Bostwick, 79, of Titusville, driving a silver 2009 Nissan Sentra eastbound on Cheney Highway.

Subsequently, Franklyn’s vehicle also collided with a 2013 black Dodge Challenger, driven by Paul Wilson, 62, of Titusville, which was at the stop sign exiting Walmart on Cheney Highway.

Bostwick was transported to a local hospital where she was pronounced deceased at 11:34 AM.

Talk of Titusville will always be free to access.
If you love what we’re doing, please consider becoming a monthly Supporter HERE.

Franklyn and Wilson were transported to local hospitals with non-life-threatening injuries.

This traffic crash remains under investigation by the Titusville Police Department and further details will be released upon its conclusion.